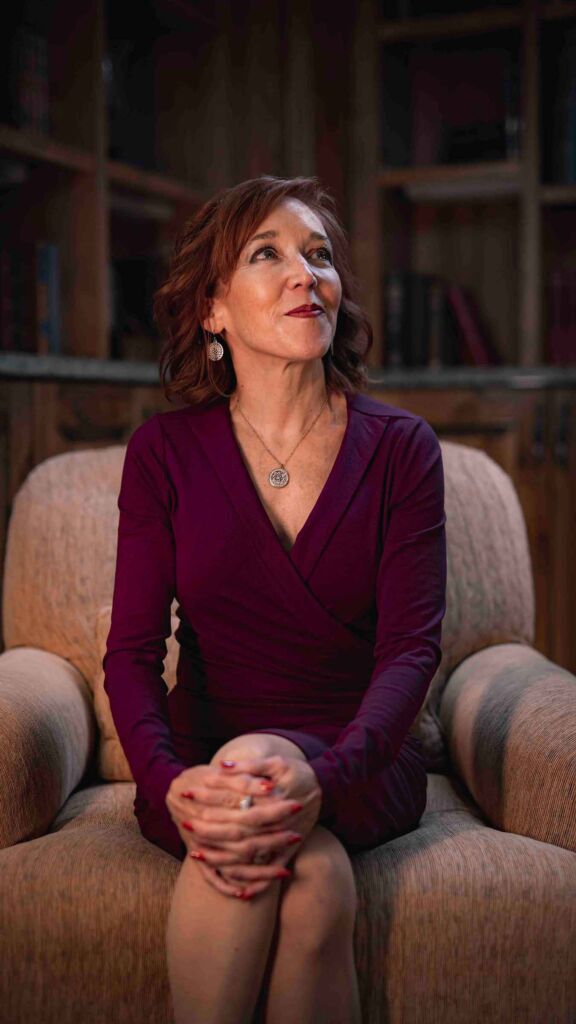 how the roots form the branches

By Tom Hess and Tatiana Bailey

“The old cliche of travel being the best educator and human equalizer is spot on,” she says. “But I give my mom credit for taking it all one step further.”

Colorado Springs’ most visible economist is a spry, five-foot redhead who speaks with animation and awe of her heritage, her family today, and how her past and present drive her fervor for what she does.

Tatiana Bailey is the granddaughter of a half-Irish, half-Norwegian American man known for his intelligence and his wild spirit, and the granddaughter of a Spanish-Bolivian beauty Irene. Tatiana talks with fascination of Grandfather Kittridge Abbott Bailey who left his small hometown in Minnesota after serving in World War I and attending the University of Minnesota for an engineering degree. Tatiana marvels at his fearlessness to have boarded a ship to South America to run mining projects during the tin boom. As Kittridge finished with one project in Chile, he was asked whether he wanted to go further inland to Bolivia. Arriving in La Paz, Bolivia, at 12,000 feet above sea level, he heard a woman reciting poetry at the hotel where he was staying. Fast-forward a dozen years and the unlikely pair had seven children, number six is Tatiana’s (redheaded) father, Humberto. Kittridge didn’t make it back to the U.S. until the 1960s, when he brought Tatiana’s father because according to Kittridge, “Humberto’s English stank.”

Kittridge passed only a few years after bringing some of his kids back to the U.S. Tatiana says it’s amazing he lived into his 60s given his heavy smoking, the toxins he was exposed to in the mines, and his Irish drinking tendencies. Tatiana never met Kittridge but visited him at Arlington National Cemetery in Virginia where many great veterans are buried. Tatiana did meet Irene and remembers her well given that (true to Latin American style) she lived with her family – nursing homes aren’t much of a thing in the Latin culture. Fast-forward a few decades and Tatiana’s dad lives with her family. “That’s just how things are done. It’s not really questioned,” Tatiana says and gives her own immediate family a lot of credit for understanding and accommodating the idiosyncrasies of her culture.

That heritage created an interesting bridge of opportunity for the life of Tatiana’s parents in Washington D.C. where they met. Tatiana’s mother, Miriam, a native Bolivian, left her hometown in Bolivia at age 20 for a job with the American embassy, allowing her to work in the U.S. Miriam always dreamed of traveling and living abroad and she courageously made it happen. Tatiana speaks with admiration about how hard both her parents worked to achieve the American dream of homeownership and provide ample educational opportunities for their three children.

Tatiana was able to capitalize on the opportunities her parents afforded her. She attended the Catholic, all-girl Academy of the Holy Names near the nation’s capital. With its small classrooms and lack of (boy) distractions, Tatiana feels she thrived in that environment, and it is there that she had her first economics class. “I always tell my husband he’s my first and only true love as I met him just after I turned 18, but honestly economics is right up there.”

Her love of economics all goes back to her roots, she says. Every year Tatiana’s parents would take her back to Bolivia, and those trips had a profound impact on how she sees the world and, now, how she counts her blessings and lives her life.

“I would get off the plane in La Paz, see the bluest skies I’d ever seen, snow-capped mountains and then promptly almost pass out from the altitude,” she says. They typically gave her oxygen at the airport, and she would be sick for a few days, acclimating. “I should have disliked the trips, and yet I marveled at the delicious smells of the street food, the colorful layers of pleated skirts with the derby hats that women wear, the cousins who I adored, and the overall feeling of being on a different planet,” she says. She also liked how everyone else was about her height.

“The old cliche of travel being the best educator and human equalizer is spot on,” she says. “But I give my mom credit for taking it all one step further.” Miriam belonged to a philanthropic group of Bolivian women in the D.C. area and these women would routinely charge whoever was going back to their home country with transport of medical devices, used clothing, and donations for food and other necessities. Miriam would always take Tatiana with her to the orphanages or medical facilities to deliver the donations and she would remind her daughter, “This is how most of the world lives.”

Mix these experiences with the dinner table conversations about politics and social issues, and voila – you have a political science and economics major who eventually earns her doctorate. Tatiana became the first in her immediate family to earn a college degree. And then her master’s in economics, then her master’s in science, and finally her doctorate in public health (because she found health issues so intricately tied to economic well being). “Honestly, I studied because I loved, and still love, learning. The degrees were a positive externality, but I think my nerdy brain also knew I would need letters after my name to have the career I wanted as a five-foot Latina with strong opinions that more of the world should have the opportunities I did.”

While at graduate school at The University of Michigan in Ann Arbor with her new, Canadian husband, Ian Glassford, she surprised herself and found she had an even stronger passion – having children.

“Funny because when I was in high school and several of my girlfriends would talk about how many kids they wanted, I would say no kids for me thank you very much,” she says. “They all said I was going to become a senator or some such thing.” But Ian, one of nine children, convinced Tatiana to have a child as she was finishing her first master’s at UM at age 24. “I found my love for my husband trumped everything,” she says. Tatiana, who had been focused on academics, found out how much she loved being a mom (to child number one, Bailey Glassford). After she finished her second master’s, she had her second son, Samuel. After finishing her doctorate, she and Ian went all out and had a daughter (finally!), named Gabriela, a son, Rory, and one more daughter, Adriana. Tatiana had to convince Ian on the last two. “I can be very persuasive when I need to be,” she says.

Tatiana gives her husband kudos for going along with her own version of adventure, not only with having five kids, but also giving her the latitude to study in Ann Arbor, and even homeschool their children for several years. “Best years of my life,” she says. Partially out of greed to spend more time with her kids and partially due to some shortcomings she saw in K-12 options, homeschooling cemented in her (economist) mind that the skills gap in the U.S. is a huge challenge. But she also saw an opportunity where perhaps she could contribute once she fully returned to the workforce.

And return to the workforce she did. In 2014 the University of Colorado, Colorado Springs (UCCS) Economic Forum had an opening for an economist as one of its founders, Tom Zwirlein, was planning to retire. He called her an economist with a personality who could grow the Forum. “Honestly, when I first flew out to meet the search committee, I didn’t think I would uproot the family,” she say. “But I was astonished at the way the community embraced me, and my gut told me I would get to really use my education and background.” Once again, Tatiana had to convince Ian, which wasn’t easy. “I will not die in Michigan,” she told him.

“Working for myself where I can direct my training and my passions to help others has never intimidated me,” she says. “I am just incredibly fortunate that I could have the educational opportunities, the full family experience, and a community platform where I can work with others who have similar drive and aspirations.”

Tatiana realized she too has the adventurous spirit of her parents and grandparents. Now she finds that spirit translates well to starting her own venture. “Working for myself where I can direct my training and my passions to help others has never intimidated me,” she says. “I am just incredibly fortunate that I could have the educational opportunities, the full family experience, and a community platform where I can work with others who have similar drive and aspirations.” Tatiana speaks very highly of Colorado Springs and how many people she’s worked with who collaborate and dedicate themselves to the betterment of their community.

Tatiana stayed at the Forum with her highly valued associate, Rebecca Wilder, for eight years. “I’ve never done the same thing for eight years except to be a wife and mother.” They both repurposed an existing nonprofit Tatiana helped start with several others in the region seven years ago. The new nonprofit, Data-Driven Economic Strategies (DDES), has a mission to enhance economic opportunities with data-driven strategies that inform community and workforce development initiatives. DDES produces economic and workforce development reports for Colorado Springs and other communities so regions can make informed decisions on how to allocate resources and grow their local economies. DDES also works with K-12 and higher education institutions to better align labor demand to training programs. Tatiana is excited by the receptiveness of certain partners such as Widefield and Harrison School Districts, Pikes Peak State College, Trinidad State College, and Pueblo Community College, as well as a couple of out-of-state economic development entities. Tatiana continues with her local and statewide economic presentations, with five updates in November and many on the books for early 2023. She also continues to write timely articles, produce podcasts, and broadcasts weekly economic updates on Fox21.

Tatiana is also ecstatic to be working with her third child, Gabriela, or “Gaby,” in this new venture. “It seems that the Canadian-Bolivian mix of Ian and Tatiana alongside all those dinner table conversations about social issues and politics has rubbed off on our two daughters,” she says.

Gaby graduated from CU Boulder with a political science degree in May and Tatiana quickly snatched her up. “I know good talent when I see it. Gaby also is young and can communicate with high schoolers as we start going into schools. She represents the next generation and how they see the world.”

“Don’t we all marvel at how quickly our time goes? If I can eke out a few more work years where I can do what I love and maybe contribute something small to my community, I’m happy,” Tatiana says. “It’s just icing on the cake now. Well, that and trips with the family skiing or beaching, watching Michigan football, or Avalanche hockey. Everyday I’m astounded at my life. It’s always been incredibly busy as a mother and worker, but every day I marvel at this life and wonder why I am so blessed.”